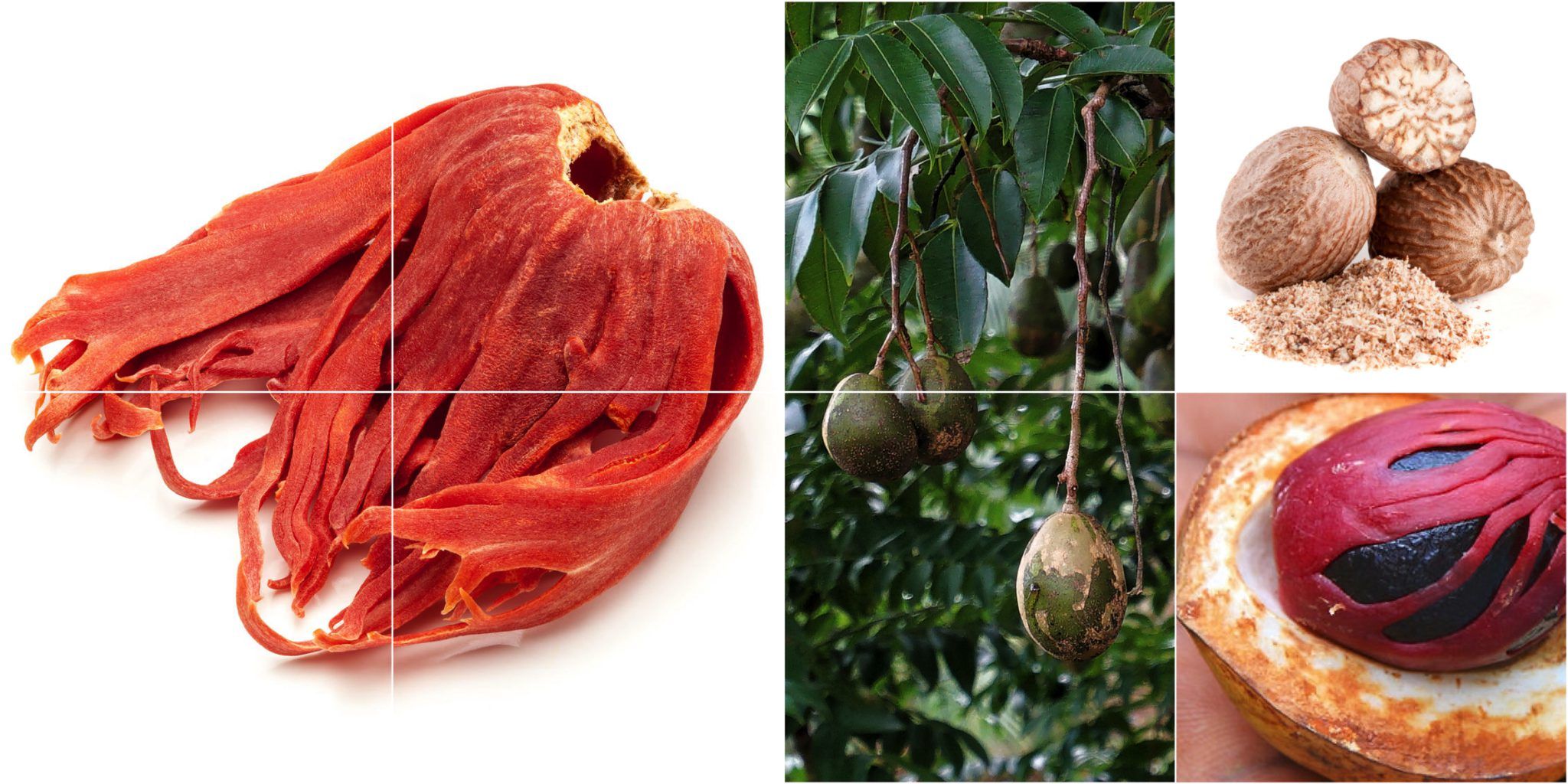 As a spice pro you know this: Neither is mace a blossom nor is nutmeg a nut, even though their botanical family Myristicaceae in German language sounds like “nutmeg nut-like”, which strictly scientific is incorrect. The German name Muskat can likely be derived from the Latin “nux muscata”, which could mean something like nut smelling of musk. Possibly, the assumption of an aphrodisiac effect of the spice comes therefrom. In any case, it suggests that nutmeg might already have been known in Europe in the time of the Romans.

The Myristica fragrans tree can grow about 15 meters high. It takes up to20 years for the first time to bear the apricot-like fruits. After that, however, it can be harvested for decades. Its botanical home is the Banda Islands in the southern part of the Moluccas, just below the equator, where the tropics are the hottest and the wettest. The Portuguese are the first Europeans who arrive on the islands back in 1511. From 1599 the Banda Islands are brutally subjected and systematically exploited by the Dutch and their United East Indian Company (VOC).

What we use as a spice is the seed core of the fruit which is enclosed by a deep red seed cover (mace). The fruit itself is used to produce sirup, jam and candies by the locals or pickled and eaten as in Malaysia.

The history of nutmeg as a spice is closely related to the cloves tree Syzygium aromaticum which originates from the northern Moluccas. The cultivation of both spices was initially monopolized by the Portuguese, later by the Dutch, which generated unimaginable profits at sale in Europe.

This was so until, around 1769, the French missionary and governor of Mauritius and Île Bourbon (from 1794 La Réunion), Pierre Poivre, succeeded in “smuggling” seedlings from the Moluccas and settling them in the French overseas territories. Later, the British provided for a further distribution of Myristica fragrans to the West Indies.

That’s why besides Indonesia, the Caribbean island of Grenada is the world’s biggest producer of nutmeg today. The best quality and the highest trade class, however, is still nutmeg from the Banda Islands.

After the harvest, the fruit is carefully broken from the downside, unless it has already cracked by itself. The core is removed and separated from the seed cover. Nutmeg and mace are now air-dried in separate processes. The nuts are then rinsed again, then calibrated and prepared for shipment.

Already as a child I liked the warm, intense and exotic scent that exhaled when I was allowed to grate nutmeg in mother’s milk-made mashed potatoes. It is not without reason that recommendations for the use of nutmeg is often related to milky, cheesy and potato environments.

In their aroma and use, nutmeg and mace differ only slightly. Maybe the freshly grated nut is more intense. Some find them sweeter than mace. Sauces, fillings and spinach, but also pastry and sweets are always worth a try to be refined with a subtle nutmeg note.

The characteristic warm-bodied-balsamic aroma comes from myristicine, the most important aromatic substance in the essential oil, contained to an extent of about 10 percent in nutmeg and mace. If we perceive a light citrus note, it is being added by limonen. That’s why nutmeg can also put an accent in combination with lime juice or grated lemon peel.

Besides safrol and elemicin, myristicin is also responsible for hallucinogenic effects of nutmeg, which can occur from an intake of 4-5 grams (= one nut). In even higher doses Myristica fragrans – like almost every spice – is acutely toxic.